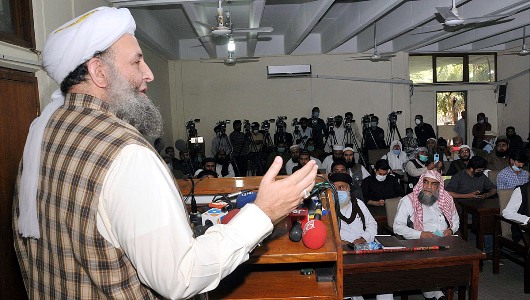 Minister for Religious Affairs and Interfaith Harmony Sahibzada Noor-ul-Haq Qadri said the country-wide Masajid would remain open during the holy month of Ramazan-ul-Mubarak under strict adherence to Covid-19 prevention guidelines aiming to control the spread of deadly virus.

Speaking to a Hifz-o-Qirat contest as chief guest, he advised the faithful to follow the precautionary measures while performing the religious obligations sans dropping the guard against the coronavirus pandemic. The culture of Quran recitation was being promoted in the country by discouraging the culture of singing and dancing.

In the Hifz-o-Qirat contest, a total of 14 Huffaz and Qurra from out of 48 were selected for recitation of the holy Quran during Qayam- ul-Lail in Faisal Masjid during final nine nights of Ramazan-ul-Mubarak.

The contest was held in Conference Hall, Dawah Academy, Faisal Masjid. The selected Huffaz would recite the holy Quran from Esha prayers till Sehri, Responding to a question, the minister said the preparations of hajj would be completed in light of directions of Saudi government.

The government was waiting the consent of Saudi Government for inking Hajj agreement. And the hajj agreement would be inked after receiving green signal from the Saudi government.